BTC and other coins may be struggling, but TRX is up 4.2 percent in the last day. While TRX is trading below 2.5 cents, the asset has found support at Oct 2018 lows. The first target will be at 4 cents in line with our previous trade plans.

While most investors are obsessed with Bitcoin, Ripple and Ethereum development, Tron is making substantial progress. Price wise, its top performance has earned it a spot in the top 10, flipping mainstream coins as Cardano.

TRX, the native currency of the Tron platform, is up 4.2 percent in the last day spearheading across-the-board crypto asset recovery. The emergence of bulls did cement our overall bullish projection. Although prices sank below 2.5 cents after yesterday’s losses, today’s support off Oct 2018 lows may be the foundation for further higher in sync with late Dec 2018 gains.

On the fundamental front, it’s clear that folks at the Tron Foundation have been doing an excellent job. Development as well as tireless marketing has made Tron one of the top contenders ready to topple Ethereum as a market leader in matters smart contracting and dApp launching. We can argue that today’s liftoff could stemmed from the concluded $1 million Tron Accelerator Program where according to Redditors, participants are unhappy:

“Tron Accelerator has been such a sh*tshow. So many shady practices going on and 0 transparency. My team didn’t receive any prize, and for a fact I know it wasn’t just another shitty dApp because it was a winner for similar hackathon for a major blockchain. Moreover, I don’t think the judges even took the time to look at the project.” 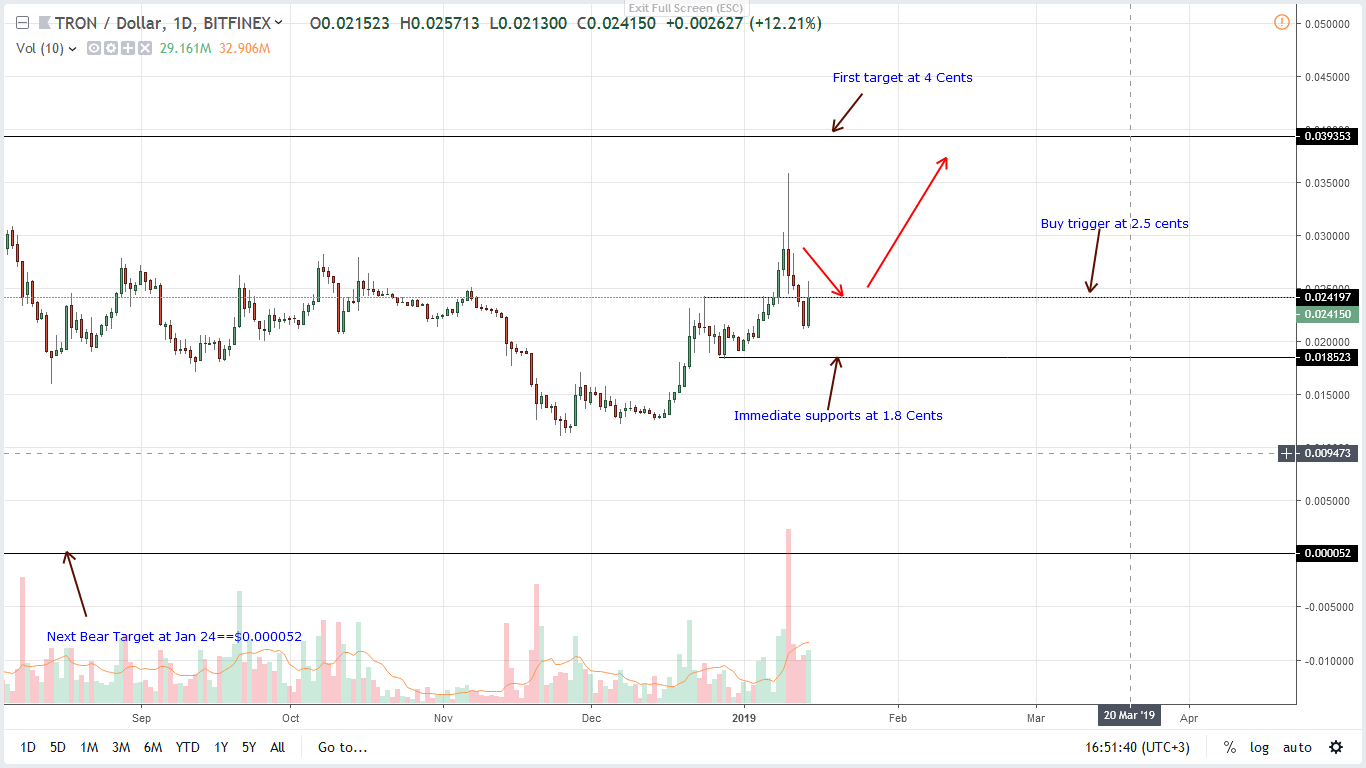 As mentioned in our previous TRX/USD price analysis, TRX price action is trading within a bullish breakout pattern after Jan 7-9 close above 2.5 cents.

Despite Jan 10-13 drawdown, there are hints of higher highs especially after today’s revival. Since TRX support is off Oct 2018 lows, we recommend patience until after prices close above 2.5 cents. After that, traders can initiate longs on every drop with targets at 4 cents.

On the reverse side, if bulls fail to start loss reversal and close above 2.5 cents, it is likely that TRX will drop towards 1.8 cents or Dec 28 lows. Further declines could trigger panic sells towards 1 cent.

By Jan 10, TRX average transaction volumes stood at 26 million. However, propelling losses was a bear bar backed by above-average volume bar—96 million according to streams from BitFinex. Therefore, despite recent losses, the trend remains positive, and for buyers to be in charge, we need to see rallies above 2.5 cents supported by volumes exceeding today’s averages of 32 million and even above Dec 21, 45 million.

CrossTower, the global cryptocurrency trading platform, announced that it...
Business