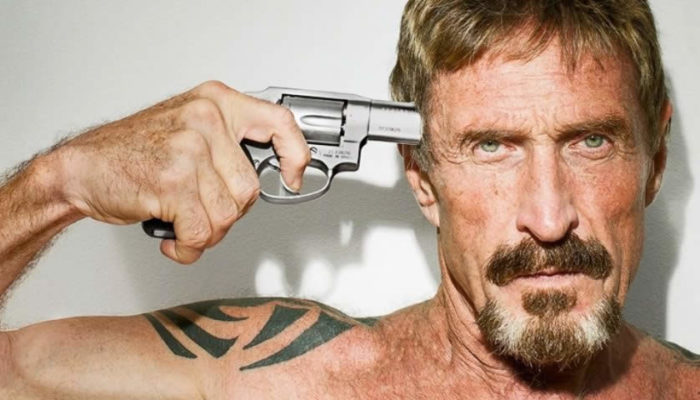 Crypto warlord John McAfee has been making waves from his yacht in the Bahamas recently. He claims to have spoken with the elusive Bitcoin creator Satoshi Nakamoto and has threatened to reveal his identity. Several in the industry have already commented on the negative impact this may have on Bitcoin and crypto prices.

Who Is Satoshi Nakamoto

Bitcoin has been on a roll recently as April has seen the asset lift itself off the floor and surge 36 percent to top out over $5,600. Just yesterday BTC broke through resistance as the fabled ‘golden cross’ formation occurred signaling further bullish gains.

Outspoken antivirus pioneer John McAfee could throw a digital spanner into the works if he makes good with his threat to reveal the identity of Bitcoin father Satoshi Nakamoto ‘within a week’. Speaking to Bloomberg McAfee rescinded the threat on legal grounds stating;

“The US extradition request to the Bahamas is imminent. I met with Mario Gray, my extradition lawyer, and it is now clear that releasing the identity of Satoshi at this time could influence the trial and risk my extradition. I cannot risk that. I’ll wait.”

He added that he has actually spoken with Nakamoto who was less than pleased about efforts to reveal his identity which has remained elusive for over a decade; “I’ve spoken with him, and he is not a happy camper about my attempt to out him,” adding that he is a technologist that has spent a lifetime pursuing hackers.

McAfee has been known for shilling crypto projects and ICOs for a fee on his twitter feed which currently has over 900,000 followers. His revelation of Nakamoto’s identity may not be the best thing for Bitcoin right now. Fundstrat’s Tom Lee, a renowned crypto bull was quick to react in agreement with the sentiment;

There have been several attempts at finding Nakamoto in the past, a Newsweek article in 2014 fingered a California physicist who denied the report. Australian computer scientist Craig Wright has repeatedly asserted that he is Satoshi himself, claims that eventually resulted in a tweet war and his own version of Bitcoin, Satoshi’s Vision, being delisted from the world’s largest crypto exchange. This recent spat is what urged McAfee to threaten the revelation;

“My entire life I’ve been tracking people who are the best in the world, and hiding their identity. Finding Satoshi was a piece of cake for me,” he added.

Satoshi Nakamoto, along with a number of early pioneers, is believed to be one of the largest holders of Bitcoins. It has been estimated that he could hold as many as a million of them which would equate to almost 5 percent of the entire supply. At today’s prices they would be worth around $5.5 billion. Since this stash has not moved in a decade many had presumed he had passed away.

If these Bitcoins enter the market it would put massive pressure on prices noted Bloomberg comparing the scenario to Mt Gox trustees dumping BTC on the market previously. Bitcoin could quite possibly dump back to new lows if a million more of them enter the market and the crypto market could freeze over once again.